The Pulahanes (literally "those wearing red" ), also known as Dios-Dios, were the
members of a religious revival of Philippine beliefs that developed in
the Visayas prior to the Philippine Revolution. At its peak, it
numbered around 10,000-15,000 adherents. The movement was severely
crippled during the Philippine Revolution after the Philippine
Constabulary took over patrols in Samar, when the U.S. military
declared the island as "pacified".


Pulahanes practiced a syncretic religious revival centered mostly on Philippine mythology and
Folk Catholicism. Individual beliefs include the use of anting-antings
as well as the revival of the babaylan.( Indigenous fighting
techniqiues such as eskrima were also utilized in the elite and
ferocious combat style) They practised a form indigenous martial arts
called Derobio Eskrima and they specialize using a heavy,
crescent-shaped Bolo knife in their battles. Religious rituals using
bottles of holy oil, prayer books such as the Bible, consecrated
anting-antings, as blessings before battles.


Americans have described Pulahanes as notorious fighters and are experts in hand-to-hand combat.
War cries were also common among their fighters. They have also been
described as "lacking in strategy" due to their high casualty figures
in battles such as Massacre at Dolores. They have been the subject of
many laws passed during the early American colonial period and have
often been accused of "banditry".


The Pulahans were more of a religious organization made up of Waray people. "Pula" in Waray means
"red"...also in Tagalog. They wore red trousers also, but this
organization went as far back as the early 1890s prior to the
Philippine Revolution.They have no connection to Aguinaldos "Red
Brigade" or Bonifacios Katipunan...the Pulahans were just crazed
religious fanatic killers who wore red...not just in their trousers but
other clothing as well. Although,we do believe many of them
participated in the revolution and Gen Lukban recruited many of them in
Samar...They were responsible for the plotting of the Balangiga
Massacre. They believed more in their religious sect then anything
else...they would go so far as killing women and children. Also, in one
US officers report, they mentioned this group had no special tactic or
strategic skill, they just exploded out in hordes of bolo rushes. To
this day Waray people are considered ruthless fighters.

If the peaceful and innocent Dios Dios movement did not take on the path of war and violence, it was presumably
the worsening political conditions under the early American regime that
triggered the aggressiveness and fierceness of the pulahan in the early
1900s.

Leyte was silent during the 1896 revolution led by Andres Bonifacio. Emilio Aguinaldo’s revolutionary governments took over
Tacloban and other towns in 1989, replacing Spanish officials with
members of the local elite who would rule until 1901 when the American
warships landed in Ormoc and Tacloban.

By then, Aguinaldo’s generals – Ambrosio Mojica in Leyte and Vicente Lukban in Samar had
assumed command of local troops, headed by the local elite and
intelligentsia. Six months later, Mojica would give up after a brief
chase in the mountains of Jaro and Ormoc, while his men surrendered more
than a year later.

But surrender did not seem to be in the vocabulary of the boleros (bolomen), many of whom were Dios Dios
believers. They continued the fight against the neo-colonizers, their
long bolos and anting-anting against the American krag rifle. This time,
they were led by indigenous peasant leaders, the most prominent of whom
was   Gen. 'Papa'  Faustino Ablen of Ormoc , Leyte 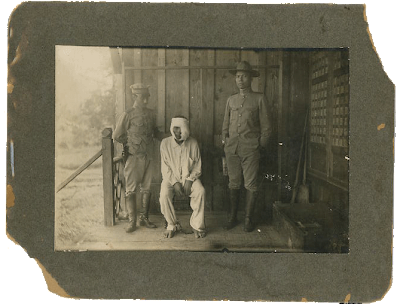 In the words of Governor General Smith in 1908: "The pulajan is not a
robber or a thief by nature -- quite the contrary. He had his little
late of hemp on the side of the mountain, and breaking out his picul of
the product he carried it, hank by hank, for miles and miles over the
almost impassible mountain trails, to the nearest town or barrio. There,
he offered it for sale and if he refused the price tendered, which was
generally not more than half the value, he soon found himself arrested
on a trumped-up charge and without hemp or money."

Their weapon was a heavy, crescent-shaped bolo with which they could decapitate a man
at a blow. Their battle preparations consisted of bottles of holy oil,
prayer books, consecrated anting-antings, and other religious
paraphernalia. Their mode of attack was a massed bolo rush. Their battle
cry was that dreadful "Tad-Tad" which means "Chop to pieces," and they
moved into action behind waving banners.

From a military viewpoint, their tactics were unsound, as they gave no thought to
casualties. They were contemptuous of death, and they rushed without
thought of position or the possibility of encountering enfilading rifle
fire.

They could be stopped by a determined stand of accurate riflemen if the odds were not too great. Often, the odds were too great
and it resulted in the death of every soldier who faced them. When the
pulajans once got to close quarters with their great knives, massacre
was the result.

In 1903, pulahans were reported in the mountains of Ormoc which was then suffering from two major maladies: malaria and
cholera. Malaria because anophelis mosquitoes hid in the abaca
plantations which was then the major crop in this town. And cholera
because of the town’s unsanitary conditions.

Apparently, the pulahans took advantage of the epidemics, claiming they could cure
cholera. At that time, Ormoc had no constabulary troops, only local
policemen armed with four or five shotguns. Four policemen were
outnumbered and killed. According to the Philippine Commission reports,
the leader Papa Faustino Ablen was surrounded by many sub-chiefs among
whom were Damaso Cajidoria, Mariano Villanueva, Custodio Librea, Juan
Tamaya, Felipe Claros, Victor Claros, Domingo Cañiso, Nicolas Malasarte
and Juan Amimipot.

Of these Damaso Cajidoria had command of a band on the ranch of one Pablo Tan who was sentenced to ten years in
Bilibid for his connection with this band. Ablen was a great organizer.
He had divided his followers into two groups, the larger group grew
crops to feed the organization and the smaller group “the warriors” did
the fighting.

Gen. Ablen and his men used the mountain fastness between Ormoc and Jaro as his headquarters, often venturing to the
lowlands in the eastern towns, notably Burauen, Dagami, Tabon-Tabon,
Pastrana and Tolosa in pitch battles against the better-armed American
troops. The pulahans were known to be supported especially by the
predominantly peasant population, using their keen knowledge of the
mountainous terrain to baffle the enemy and often resorting to
ambuscades to harass the latter.

After their raid of Burauen, the Americans were convinced that the pulahans were not mere bandit
gangs but should be seen as an insurrectionary force. A portion of the
report of the Leyte governor in 1906 said:

“ The pulahanes made no attempt to rob or molest the people of the town their principal
object being to destroy the municipal records, secure the arms of the
police and wreak vengeance upon that organization. After remaining in
the town about two hours the band retired to the mountains.

In their attack upon the police of Burauen, they assaulted only the
municipal force and a former (who is suppose to have offered resistance
on the road), took possession of their arms, and destroyed the official
records; they did not touch the money of the municipality nor any other
inhabitant of the town. In their incursions on different barrios toward
the end of July, they committed no pillage nor offended women. They
prayed and compelled persons to follow them. They asked for whatever
they needed-rice and black and red cloth. This conduct and the extent of
the movement made some persons believe that it was a case of sedition
or insurrection.”

At one point, the military situation became alarming for the American occupation forces that 17 seventeen companies
of scouts and four companies of American troops under Colonel Smith.
Eight United States Infantry were operating against the pulahanes. This
according to Brig. Gen. Henry Allen of the newly organized Philippine
Constabulary. General Lee was ready to bring his companies from Cebu to
reinforce the beleaguered American troops in Leyte, along with Col.
Wallace Taylor to participate in operations from Albuera and Ormoc.

The movement was effectively suppressed in the island when Papa Faustino
Ablen was captured on June 11th, 1907 in the mountains of Dagami.
Ablen’s wife and child were earlier taken on May 29, 1907. (By Emil
Justimbaste)


According to some officers report, these groups would wave a white flag in front of them during
battle, "believing" it would shield them from American bullets. But
when you really think about it, waving a white flag means you surrender
and not to shoot...and when the Americans stopped firing they may have
believed the waving of their white flag is working and warding off
bullets. As ignorant as these cults were, they were a force to be
reckoned with, and most people feared them.


Waving a white flag can mean surrender or a flag of truce to talk. It can be used by both
sides. One to say surrender or the other that is surrendering.

But still, it would stop firing from the other side to see what the white flag is about.
This is what everyone knows is the general "rule" in war. Wave a white flag, truce or surrender.
But these pulahanes, , did not know that. They were mostly made up of
uneducated illiterate high landers who knew nothing of the rules of
war. They honestly believed the white flag was there anting anting.


On their white flags there were some inscriptions (and maybe symbols) on it ; according to
some other sources. the flags were all white with a red cross in the
middle..

THE RED CROSS FLAG OF THE PULAHANES MOVEMENT

A PULAHANES NEAR HIS WHITE FLAG Permalink Reply by Tasi H. ALO on November 2, 2010 at 12:59pm
Many folks don't realize that Pulahan Derobio EsKrima comes right out of Filipino history ! Its a blessing that knowledge can be passed on generation to generation like it has in the Pedoy family, it is through this sharing of the art that we strive to establish balance. My cousin Haku Brad Namahoe comes out the Villabrille lineage -thru Maestro Rudy Orlando.
All I know is that Hawaii is rich with FMA culture and traditions. \m/ Aloha - GM Tasi H. Alo / WSEF & NorCAL representative for Pulahan Derobio EsKrima & Siangco Ohana!